This forum contains some additional guides, mostly relevant to IC Domo. You may find the lucky bag info thread and Joycard purchase guide here, among others.
Post Reply
2 posts • Page 1 of 1

Normally, once you hit 70, a skill is maxed, and you can't get it any higher. However, Softstar added a new set of items to further extend the skill rank of skills that would normally be available up to a few levels higher, mostly with level requirement reduced to 70.

These scrolls are mainly obtained through items called '技能書卷抽獎券' (Skill Scroll Lottery Ticket), of which there are at least 10 at current. These are obtained from within various lucky bags, or combined by putting together a lot of skill scroll fragments (I think you need like 60 of these). The fragments are also from lucky bags iirc. A few scrolls are also available at Trader Girl, in exchange for large amounts of Red Diamonds.

Here's an example of one scroll; this is the Joan's Jive Lv12 scroll. All of these scrolls use the same icon of a blue scroll. If it looks like a piece of paper, it's not one of these scrolls (it's probably a Sorcerer scroll recipe in that case).


How to know if a scroll exists, and if it does, can you even use it?

The easiest way to tell if a scroll exists for your skill is to check your 'next level' skill information for skills that maxed out at 70. However, you must be using the Chinese magic file to do this. 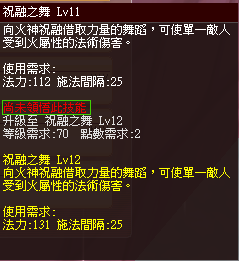 The words in red which I have squared off in green are what you are looking for. This is what tells you that the skill requires a scroll to upgrade it to the next level. Also take care to see that the 等級需求:70, for some of these skills will still need a higher level to use them, even if they need a scroll. The obvious downside of this system is that even if you reach 75, you will still need these scrolls to unlock the higher skill ranks. I believe that some of the skills with higher level requirements aren't in game yet, eg the Scorching Scroll upgrade scroll requires Lv73, and I have never seen it.

Keep in mind that these scrolls only UNLOCK the skill level, you still need to have free skill points to actually get the skill.

At this time, these skills can only be upgraded by a single rank.

When subbing these skills on lower level jobs, the game takes the original level requirement of the skill (eg 71) when it calculates whether your damage or duration is penaltied or not. If you don't understand what i am talking about, you can read this article about the Sub Job Level Penalty (on Frost's forum).
Top

Incomplete Source Listing. There are 8 of these 技能書卷抽獎券 in total, but I don't have listings available for all of them, and only incomplete listings for the first 4. If you get one of these, please screenshot before opening.