Pearz's Getting the points: How to play the arena Guide

Backups of original guides from DoMO forums of the past. The majority of these were backed up from posts on TWDomo.com before its domain expired (most of which were originally retrieved from Aeria by Angitia and Aaron). Extremely old.
Post Reply
1 post • Page 1 of 1

Pearz's Getting the points: How to play the arena Guide

Introduction
Welcome to my arena guide. So you may or may not know me, but here is your everything you need to know about the arena guide. 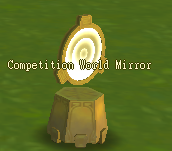 You can get into arena from the 3 Cities Eversun, Collington and Darkdale. Below are maps to show you where to enter. (where I am standing) 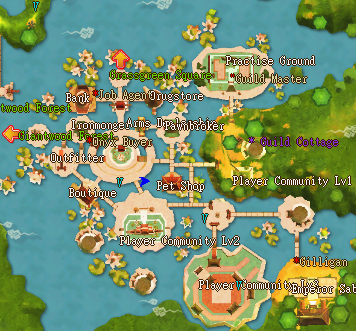 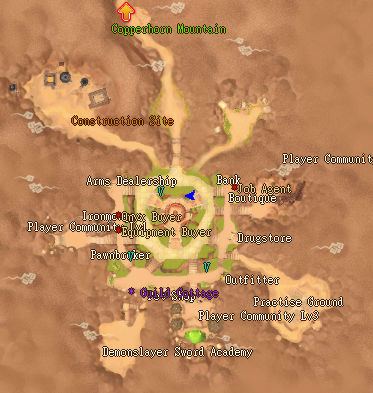 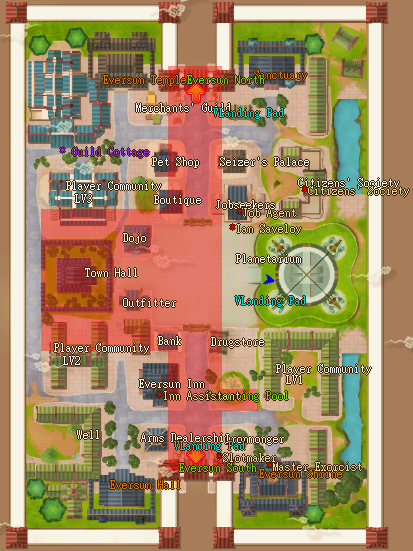 The pet shop NPC. She is exactly same as the one in town. You can evo pets, heal them or buy some pet snacks.

Your handy Benny inside Area. He sells your consumables like bolts, scrolls, frogs and others. He can also repair and get access to your bank.

He is the whole dojo combined into 1 NPC. You can change your main class and your subs here.

This NPC sells you egg exploiters and trapping mirrors depending on our arena level.

Check results – You go here to rank up your arena level. IF you do not have enough points it tells you how many you are missing of each different type of points.

Explanation – Shows you all the different level ranks and how many points to obtain them.

Check Billboard – Shows billboard that you would see outside eversun for fame, money etc ranks.

Heaven Sword Ranking – Shows the current top 3 points for heaven sword that week and who won with how many points last week for this sword. 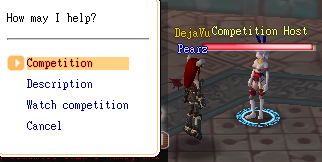 Competition – You choose this option to view all the different matches available to join.

Description – Explains different point system, heaven sword etc etc. In other words you can read that instead of this guide XD

Watch Competition – You can join a match that has already started. You are a ghost and no one can see you in the match, though you can Broadcast and chat with players in arena. 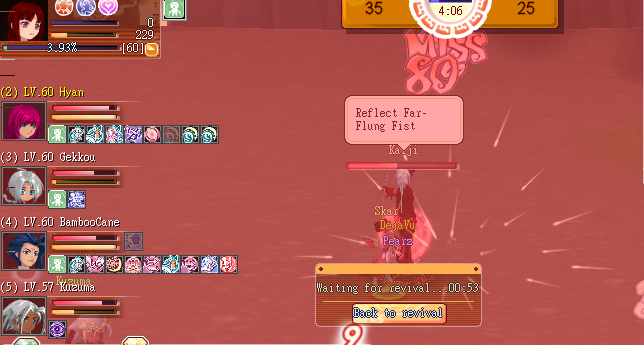 Goal of these matches is to kill the other team more then they kill you. Pretty much a death match. Most commonly played type of match as it determines if you can get Heaven sword. Not much to explain here but commonly the team that works as a team (sticks together) does better in these matches. It is a team after all.

Note: only match where you can get double HP from the healing stone :O

The point of this is to kill your opponent’s cannon while protecting your own. Basically the score = % damage on cannon hence 100 points = win. You can heal/ buff your cannon to remove points from your opponent or attack to get points for your team. Again a hugely team based match. The cannon has 2 mil HP and hurts a lot of your not at least 5x.

Note: Do not prolong your cannon as it gives your opponent 33 points (50% boast in cannons hp) since it calculates the points by % damaged. Since the HP amount it has might be the same, but the max life increased so it thinks opponent did 33% worth of damage. These points wear off after prolong ends but if it doesn’t end before the match ends your pretty much setting yourself up to lose.

Part 7 – C point Type Matches
Here is where you show off your pro PVE skills in arena. There are 2 types, 1 where you kill doggies and other where you kill pupus. The idea stays the same you want to kill only the opposite side’s pupus or doggy. Difference:

Pupu – Score 1 point per kill and lose 2 points if you kill your own side. The chest Beater is worth 5 points for whichever team kills and killing a chick nets -5 score for the team that kills. The thing about the match is if the point difference between the 2 teams differs to much the levels of the Pupus will change IE 1 side fight level 10 versions while other side fights level 50 versions giving the losing team a chance to catch up.

Doggy Wars – Score 1 point for kill but no point loss for kill your own side mobs. The chest beater gives 3 points only if your team is losing, otherwise if your winning team you get zero points. For the chick only the winning team can lose 3 points if they kill it while the losing team killing it will not lose score.

Pics of the chest beater and chick I mentioned: 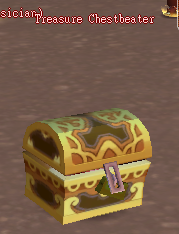 Part 8 – D point Type Matches
The Idea of this match is for both sides to kill all 4 bosses.
Standard stuff about D points:
Occasionally the boss summons karate chicks that make the bosses immune. IF X team boss summons The chicks, it spawns on Y team side. The X team’s boss gets invulnerability. Y team must kill the chicks with normal attacks as all skills miss them to remove the invulnerability from X team’s boss.
Only note is to remember to bring some heavy damage and get some good supports and forms.

Boss Set 1 & 2:
These Bosses are pushover, just keep hitting them and they will die fast. 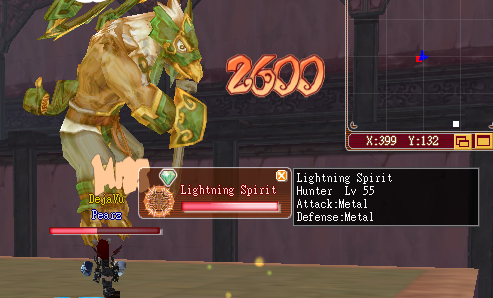 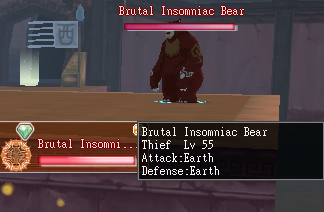 Boss Set 3:
Get Spirits (from wiz) cast on everyone cause these bosses start to hurt. The Monkey is significantly harder then the tree. Remember to keep spirits up and they will drop in no time.
Plum Tree
Level 60
Element: Wood

Boss Set 4:
These Bosses are brutal. No point wasting time having a support heal, as they can’t keep up with heals. Better off to just have everyone change to damage and hit as hard as you can while you still have invulnerability from teleport.


Part 9 – All about chests in arena
These chests randomly spawn on all the maps.
Note is that you can only have 1 of these buffs at any time. IF you get another one, it will cancel your existing chest buff.
In C point matches these chests are instead changed into Eggs, that drop when you kill the CHick or treasure Chest beater.

(don’t ask me I don’t know how that helps) Duration 2 Mins (said to help boast the speed your combo bar increases, no confirmation on this yet)

It teleports you back to resting area.

Only A point type chests

You target an enemy and hook them into you. You lose hook when you leave arena. 1 time use.


Part 10 - Heaven Sword/ Emperor Sword
Every week the top 3 players who gained the most points over the week in A points matches only are awarded the Heaven sword. The week you already have the sword, you cannot qualify for the sword for the following week, IE you can't use Heaven sword to get yourself the heaven sword again. (since its obviously to good). You can check your score and position for the week at the fight attendant to see how your doing that week and if you got a chance to win the heaven sword. The Week starts and ends on saturday day night at 12 am EST. IF you win it lasts for 7 days and you receive it in your mailbox. 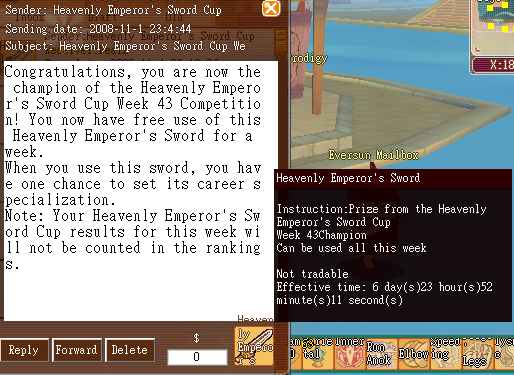 On first use, it lets you choose what type of weapon it will be. The countdown on timer starts regardless if you take it outta your mail box or not. 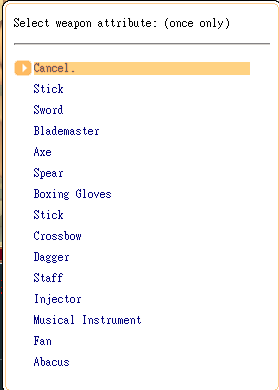 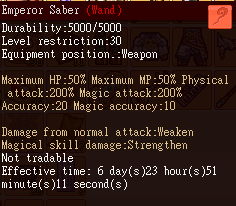 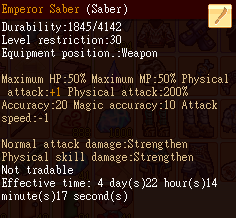 Note: Emp sword has extra effect depending on the type of weapon IE BM sword -1 attack speed, Fan +1 attack speed. I'll slowly add every type of emp sword as i get them but they will take a while. And yes I +1 the emp sword with a book so technically you can gold stat emp sword... but why?

The extra bonus depends on the weapon. Basically same as a gold stated version of the weapon.

Part 11 - Points towards title and arena level
For A, B, C points the final points you gain towards lvling up is calcuated the same way. In a 2 v 2 Match winning team gains 1 point and losing team gains nothing.

I keep Dieing in arena help?
Get somone to teach you how to pvp.

Can you teach me?
Depends on my mood. 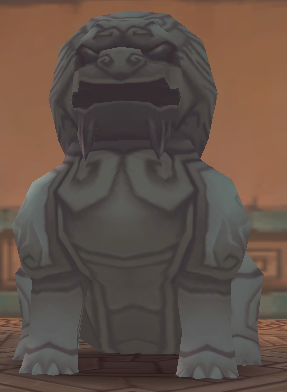 Random Lions you can attack of every level range. They don’t drop anything and have zero defense. Guess its just to test skills but its not accurate test. Just for decoration mainly.

Any questions you can find me in game or post. Umm thanks for reading?