This forum contains miscellaneous informative posts, many of which are backups of threads posted in the 'Discussion and Questions' forum on TWDomo.com.
Post Reply
1 post • Page 1 of 1

Feb 16/2016 Note: Missing images recovered from archive.org and rehosted on this server.

Retrieved and Compiled By: Angitia


Mythyc wrote:Ok, well I Finally managed to get my hands on some cheap restats, and I decided to do a few tests involving the healing power of doctor heals when stating with wisdom and with agility.

The following results were taken as follows:

- I used my level 55 shaman for this, using equip syringe (therefore I used a syringe throughout the tests, so it comes to the same thing, except you can increase the healing power by 10% proportionally due to class penalties)

First off, let me start by giving out the raw results:

Basically, in this case, first aid with full wisdom heals 1744, while with full agi it heals 1300.

As for Greater Healing, it heals 1887 with full wisdom while healing 1474 with full agility.

Hence, the proof that wisdom does affect healing rate is correct.

Now, where the going gets tough is the HPS (Yes, I invented this acronym, it means healing per second).

(by the way, FA's cooldown is 3 seconds with full agi and GA is 6 seconds)

Basically, the same thing. So one way or the other, you aren't really penelizing yourself. I have yet to decide myself which is better, because seriously...apart from healing...what else does a doctor do ?

I mean, agility also gives evasion. But is that truely useful for a doctor ?

And wisdom gives more MP and better MP regen. I think that might actually serve a purpose...you know ?

Anyway, point being, both choices are safe. It's really up to you guys to decide which you would rather invest into.

Well, I did the tests myself.

Again, I healed myself 10 times, except now I was equipped with a full heavy armor set (-15% magic attack) and I removed my syringe (-74 magic attack). In total I went down ~100 magic attack, which is considerable.

Here are the results I came up with (oh as a minor detail, I was statted full wis at the time of this test): 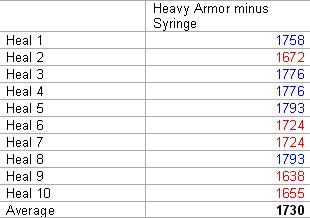 
Anyway, I hope these findings will help you guys out when you'll be deciding how to stat (or restat) your doctor


exomega255 wrote:I thought it was mentioned already, by the dojo NPC that wisdom increase healing not magic power.... but maybe that wasn't clear enough, and now it's confirmed by experience.

Kudos to Mythyc, for the experiment =)

Now I want to add, perhaps agility is not a "big deal for doc", but consider other spells that have a longer cooldown? Take less time to frog buff everyone in party perhaps? Live 1-2 hit longer? Constant but smaller (magnitude) heals could be better in a way. [I know it sounds vague, but I can't articulate it into words atm], though it would require docs to manually press more buttons.

soysauce2rice wrote:I encountered a full Agi Doc a week ago in a Grotto party and of course her heals were quite fast. She could let the merc have 1/4 of his hp down and heal him back up to full in about 10 seconds or less.

I also restatted to full agi. The only skills i have are first aid 8, greater healing 4, regen 7, frog forcefield 6 and prolong 6. I don't have anymore points for frog legs soup.

As Mythyc said FA is 3 seconds cooldown, and GH is 6. FA also takes just 1 second to cast and GH just 2 seconds to cast. Full Agi really helped me because other people may get hit and i don't have frog leg's soup but i can quickly heal them, I spam FA on the merc and GH is that happens, repeat. However you will have mp problems sometimes, especially after buffing your whole party.

Though i usually get mp problems if a Muse doens't play the Diligent Ditty spell.. even with full buffs the merc doesn't always last.

I'm pretty sure it's already been said that there is no such thing as instant recast so full agi seems a little iffy to me. Question: If we're going with a 2 Wis, 1 Agi build (to somewhat even things out?) at what point should we stop putting points in Agi to have the fastest cool down possible? 3 secs is the fastest that I've heard so far (since instant recast is myth no matter how many points you put in Agi), so suggestion, please? =3

Personally, I went 3 wis, because I find my MP to be a bit tight, especially since I AoE with my doc most of the time instead of healing.

Healing for parties is never difficult without agi, unless you get an extremely crappy one.

just so you know, the common places to stop for agi are